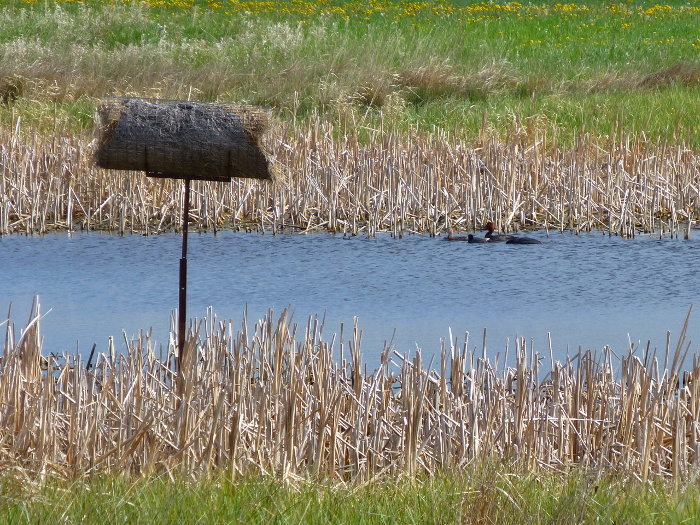 Thousands of new mallard ducklings will be hitting the water in wetlands across southwestern Manitoba this spring.  That would appear to be unremarkable, however, these ducklings would likely not exist but for the combined efforts of the Delta Waterfowl Foundation and the Manitoba Habitat Heritage Corporation. These two organizations have erected more than 2400 nesting structures on wetlands throughout southwestern Manitoba. This is not a new concept. In fact, the program began way back in the early 1990s.  What is new, is that this winter they are adding another 650 “Hen Houses,” as they are known, to bring that total to more than 3000.

Matt Chouinard, a conservation biologist with the Delta Waterfowl Foundation, explains that success for mallard hens that nest on the ground is extremely low:

“Our research has shown that success for mallards nesting on the ground over the past four years in the Minnedosa area has averaged just two per cent.  That is consistent with numbers from a similar study conducted a few years ago. A mallard hen will begin a new nest if she loses her first, but the chances of success are no better the second time around.”

According to Matt, most duck nests are lost to predators such as raccoons, skunks and foxes.

“In the parkland area around Minnedosa, the wetland base is fairly consistent in that it is unusual for wetlands to completely dry up. Because of this, the area is very biologically productive, and has resulted in a robust predator base. In addition, the loss of natural habitat around the wetland potholes over the years has decreased nesting cover, making the nests easier to find by predators.  Hen Houses provide a more secure site for mallard hens to incubate their eggs.”

Hen Houses are tube-like structures, comprised of two layers of rolled wire fencing with flax straw sandwiched in between. This tube structure is then fastened to an eight-foot tall square metal pipe, which is driven into the muddy bottom of the marsh. The nests are still vulnerable to ravens, and the occasional mink, but since the nests are located above water they are safe from the land-based predators.

Delta’s student research program has studied the success of Hen Houses since 1991 and the findings are revealing.

“The success of nesting tunnels, depending on the area, can be as high as 80 per cent, but a study conducted in the early 2000s found the average success rate to be about 60 per cent,” Chouinard says. “While that might seem a little low, when you compare that to the two per cent success rate on the ground, it is pretty impressive.”  In addition to being safe from most predators, ducklings can jump from the nest directly into the water, instead of walking overland to get to the water which exposes them to all types of predation.

“We have also found that if the mallard hen was successful, she will most likely return to the same nest, or to one nearby.”

Of the 650 new Hen Houses to be installed this winter, the Manitoba Habitat Heritage Corporation has received funding from Wildlife Habitat Canada for 450 nests. Delta Waterfowl Foundation is adding an additional 200 Hen Houses, with funding provided for the third year in a row by a donor group in Memphis, Tennessee called the Minnedosa Duck Club.

“The Hen Houses we have installed are all over southwestern Manitoba, but especially dense in the areas around Reston, Shoal Lake and Minnedosa,” according to Roy Bullion, a Habitat Conservation Specialist with Manitoba Habitat Heritage Corporation. He is based in Shoal Lake.

“Of the 450 new hen houses we will install this winter, 250 will be going to the Shoal Lake area. Delta Waterfowl Foundation provides the structures and we install them in December, in early winter, after the ice is safe to go on but before it gets too thick. It’s a lot easier to drill through inches of ice rather than feet!,” he explains.  “We situate the Hen Houses near the edge of the marsh, near the reeds. The ideal height for the tunnel above the water line is two to three feet, but, obviously, that will vary as the water levels fluctuate in the marsh over the seasons.”

“We don’t have any trouble finding places to install the Hen Houses,” he says. “We approach landowners to ask if they would be interested in having the Hen Houses erected on their land. It’s old hat now. People see the structures all over and they know what the program is all about. We have never been refused.”  Roy says they look for areas with a high density of wetlands, largely because it is more efficient to install several structures in a smaller area than having to install one or two in one location, then travel to another site.

“These locations where we place a number of Hen Houses in a relatively small area are referred to as super sites,” Bullion explains. “We base the number of nests on the number of breeding pairs in the area. Research has shown that we can clump the structures and it doesn’t seem to cause any problems.”

Each spring, the Hen Houses are examined and prepared for the new season.

“We usually go out in March, after the worst of the winter is over. We examine the flax straw and replace it if necessary. Flax doesn’t degrade as fast as most straw, so it will typically last for two or three years,” says Bullion. “We try to duplicate what a mallard nest would be like by placing soft grasses, such as brome, inside the tunnel.”

Bullion and Chouinard both agree that when it comes to the bottom line, the use of Hen Houses is the most cost-effective and efficient way to produce ducks. And it seems the ducks themselves have bought in to the idea.