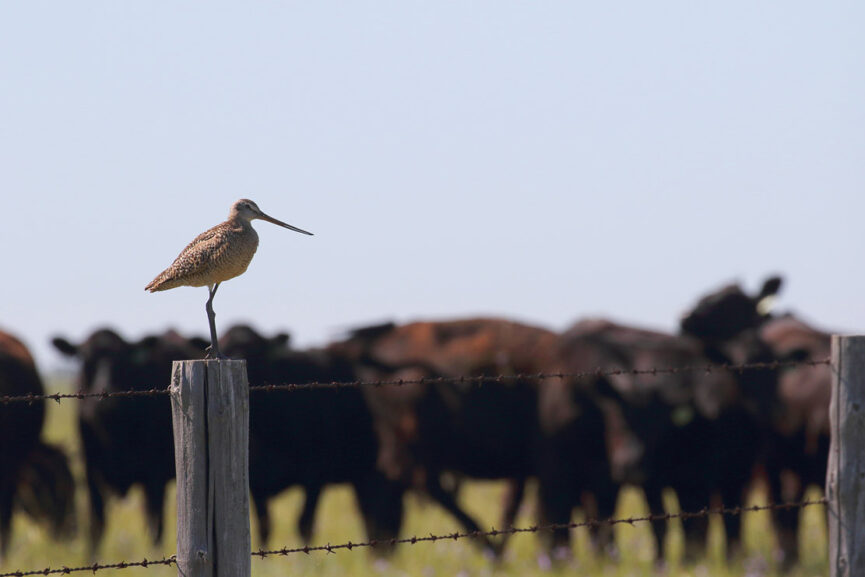 Brian and Kristen Breemersch operate a cow-calf farming operation located southwest of Brandon.  Their land is primarily pastureland that is interspersed with wetlands.  They bought the land from Kristen’s parents about 20 years ago to start a family run farm.  Their land attracts a rich variety of waterfowl and wildlife, which Brian and Kristen enjoy.

Several years ago, Brian visited the Manitoba Habitat Heritage Corporation (MHHC) booth at Ag Days in Brandon to chat with the MHHC staff.  Brian was interested in pasture and grassland management improvements and any conservation program opportunities that might work for their farm.

“At the time we didn’t have a lot of program opportunities or funding for farmers looking to improve their grasslands and pastures,” said MHHC Area Conservation Specialist Kasie McLaughlin.  “But we did have the Conservation Agreements (CA) Program and funding to partner with private landowners to perpetually conserve wildlife habitat.  Through follow-up sharing of information, Brian and Kristen decided they wanted long term protection of their habitat areas.  So, we tailor made a CA for the Breemersch farm that provided them with funding to conserve wetlands and grasslands.”

“The land we put into a Conservation Agreement is my pastureland,” said landowner Brian Breemersch.  “It is only good for livestock.  By my standards, it should remain as pasture and wildlife habitat.  Marginal land and habitat are disappearing and being drained.  There are places that will not grow crop that are good for livestock and great for wildlife.  I am in favor of farming with livestock and leaving the habitat, so the Conservation Agreement program was right for me.  It’s a win-win.”

In 2020 MHHC developed a new program offering funding incentives to implement beneficial management practices (BMP’s) on pasture lands across Manitoba. MHHC recognized that grazed pastures provide a multitude of ecosystem and wildlife benefits, including protection of species at risk on private land.

The BMP program includes a wide variety of incentives, such as funding for fencing, watering systems, mowing brush, and pasture seeding.  MHHC is open to other BMP ideas from cattle producers that will help maintain pasture lands along with wildlife habitat.

“I noted that Brian was interested in some pasture management improvements on his farm, so I gave him a call,” said Kasie.  “We discussed the new beneficial management practices programs, eligibility criteria and incentive funding.   Brian and Kristen were interested in the watering and fencing incentive programs, so we were able to help them out with that on their farm.”

“I want to thank Kasie for mentioning this program to us,” Brian relayed.  “It is a big financial boost for us.  We started this operation over 20 years ago and it takes hard work, time and a lot of money to get things rolling.  The assistance with the fencing program involves a bit of labor, but I like it and it is really good. We have 35 cow-calf pairs out on one of our pastures that we have under the fencing program, so it is already paying off.”

“I would recommend this MHHC program to anyone if they have grazed pastures with wildlife habitat,” said Brian.  “Working with Kasie was wonderful.  She understands the wildlife habitat preservation side and she also understands what cattle producer’s needs are to live and survive off that same land.  This is a win-win program for MHHC (wildlife habitat) and farmers.  MHHC recognizes the wildlife benefits in maintaining grazing lands, and I am 100% in favor of that and working together. It is a phenomenal program for producers to get money for the land to keep grazing it as it is and preserving it for wildlife.”